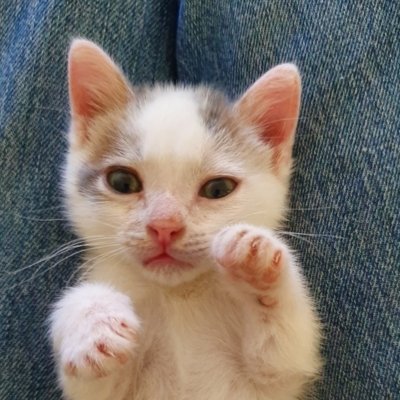 The third kitten of three that came here in April 2020, Ari is a brother to Edu and Paco.

While those two are similar in appearance, Ari is quite different, being mainly white with some patches of grey.

Unfortunately, Ari has had some difficulties with his health, and is currently under veterinary care. He has not gained as much weight as his brothers while here, and has had some digestive issues.

Because of that he has not been available for adoption, but we hope that his current treatment coupled with a special diet will resolve all his issues shortly.

Update; It seems that the treatment was entirely successful with Ari and he was not needed any intervention or medication since the end of the first treatment.

He is still available for adoption, but as he is a very social cat we are hoping that he will go with one of his foster companions.