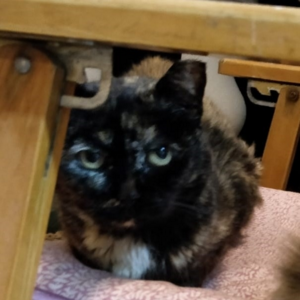 Big Wookie was a cat that came to us in the summer of 2012. She was fully grown and came with a litter of four kittens.

Big Wookie was a truly wild cat, all she wanted from us was food, nothing more.

We don’t know how old she was, but we guessed that she was about five or six when we first met her.

It proved quite difficult to trap her and so she managed to have another litter of kittens before we could neuter her.

She remained a wild cat up until about 2018, when her age and the cold winter convinced her to move indoors. It was a slow process, from that start to being able to touch her took months.

In the end though she turned out to be quite loving and affectionate.

She developed kidney disease in her later years, and would constantly eat, often sharing any food any other cat might have.

Because of that she became a big part of our life.

She finally gave in to her kidney disease, and the end was mercifully rapid. She ate on a Friday evening, and on Saturday morning she was in a coma, dying at home later that same day.

She gave us some great kittens, some nice memories (and photos) and I think she became a bit of a legend to the many people that knew her.

Not only was she difficult to trap and neuter, but her kittens were also wild and so we still have a grand-daughter of Big Wookie – Jelly.

Big Wookie will be missed.