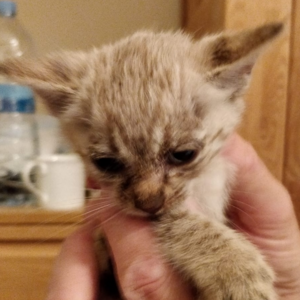 Coco is one of five kittens that were found on the street. Their mother had been killed and these kittens spent five days on the street before they were taken in by the charity and arrived here.

Some people near where they lived had been feeding them but unfortunately the food was not really appropriate for kittens this young. We estimate that they were about one month old when they arrived.

Because of all that, they were not in good health when they arrived. They were very underweight and undernourished, and possibly because of that they had a skin condition which was later diagnosed as a fungal infection on their skin.

Just to top that off, they were street kittens, so not at all friendly or happy to be here.

After some months with various health issues, Coco is doing very well and is quite tame in comparison to how he was when he first arrived.

Two of his brothers and his only sister have already been adopted, so that leaves him with his brother Lili. We hope that it might be possible for these two to go together but Lili is still quite timid with new people, so it remains to be seen what will happen.