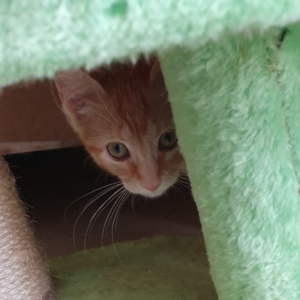 Libby is one of a litter of four kittens that we fostered for Amancu.

She was born on the street in April 2019 to a street cat, so she was quite timid and a little bit wild when she arrived.

The only girl in her litter, two of her brothers were adopted, but she and one brother remain waiting for their new home.

She is still timid, but is very playful and quite loving. She enjoys playing with the other young cats, and is very friendly with people that she knows.

Initially we found it difficult to distinguish her from her two orange colored brothers, so we put a small bit of lipstick on her ear to identify her. After that we referred to he as the lipstick kitten, which became ‘lippy’, and finally Libby.

Update: Libby was adopted on 7th May by a family that were willing to put in the effort of rehoming a very timid cat. After three weeks it seems that she has adjusted well to her new home and their existing cat.