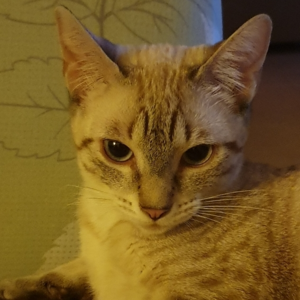 This little cat came to us from Amancu the local animal charity initially as a foster kitten.

She had been given up by her previous owner as that lady had developed allergies.

When Mia first arrived she was very angry with people and with other cats, presumably due to what had happened to her. It was a few days before she became receptive to her new surrounding.

She received a number of visits from prospective adopters but did not seem to like any of them, being aggressive or sullen with each one.

She was almost adopted twice; the first fell through for personal reasons, the second fell through when Mia tested positive for leucemia.

As she had spent so much time here, and the prospects for finding a home for a flv positive cat being limited, we decided to adopt her and she lives here now permanently.