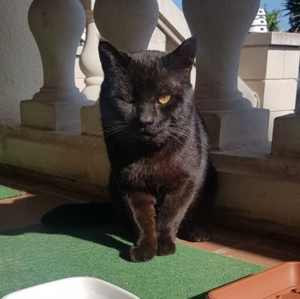 Nigel is a male un-neutered street cat of indeterminate age.

He is not at all friendly with people, it has not been possible to touch him so far, though he has been coming around frequently for food for over a year now.

We don’t neuter male street cats if they are not reasonably tame, as it can cause problems for them in their street life.

He has shown no inclination to be tame with us, but he gets on well with some of our younger cats, and the older cats seem to respect him. He does not appear to be an aggressive cat.

He is listed as a resident but in reality he only comes for food, and sometimes might now come here for weeks at a time.